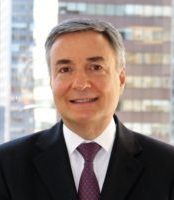 Stephen Paras is a senior leveraged finance and investment banking professional with over 30 years of experience including being the Head of U.S. and European leveraged loan capital markets divisions for Merrill Lynch and Bank of America Merrill Lynch (BAML), respectively. Mr. Paras structured, underwrote, and distributed over $50 billion in event-driven financings across multiple cycles and a variety of industries.

Prior to his distinguished 16-year career at BAML and predecessor firm Merrill Lynch, Mr. Paras spent six years at Chemical Securities where he was a Vice President and core member of the firm’s leveraged buyout and syndicated finance groups.

Mr. Paras began his banking career at Chase Manhattan Bank and Citibank. He holds an MBA in Finance from University of Rochester, a BA in Economics from Hobart College, and is a CFA Charterholder.